Bitcoin started a fresh increase above $58,000 against the US Dollar. BTC traded close to $60,000 and is currently correcting gains. 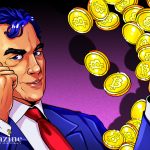