The Ethereum Foundation continues to edge closer to the transition to the proof-of-stake (PoS) model. On Monday, Ethereum’s first mainnet Shadow Fork went live.
The purpose behind this is to primarily conduct a stress test on the existing assumptions about the testnets, and mainnets to understand how seamless the shift to a PoS consensus will be.
Ethereum DevOps Engineer, Parathi Jayanathi had stated in his tweet, “The aim of the Kiln merge testnet was to allow the community to practice running their nodes, deploying contracts, testing infrastructure, etc.,”
The Kiln was the last testnet of the Merge which was concerned with the shift to Ethereum’s execution layer from proof-of-work to the proof-of-stake mechanism. He quoted in his latest tweet about how the testnet is “a way to stress test our assumptions around syncing and state growth”
Suggested Reading | Mastercard Files 15 Metaverse And NFT Trademark Applications – A ‘Priceless’ Move?
Ethereum’s Multi-stage Transition To An Energy Efficient PoS Model
The Ethereum Foundation Blog post released last month mentioned how the whole shift to the PoS has happened through various stages.
The blog post also speaks of a “culmination of six years of research and development” which was undertaken to ensure enhanced security along with creating a more energy-efficient model.
The PoS consensus algorithm which is supposed to replace the PoW model is primarily validated by nodes operated by “stakers” instead of “miners”.
The proof of work’s main point of contention is the huge amount of energy that is required to form a block, as opposed to the proof-of-stake mechanism which works with far less amount of energy consumption.
So What Exactly Is The Ethereum Shadow Fork?
“Shadow Fork” refers to copying the data from a mainnet to a testnet, i.e, from Ethereum’s mainnet to a testnet which will help to stress-test the features before the final deployment.
This happens as the testnet is mimicked very closely to the mainnet for a better assessment, currently, the testnet is processing over a million transactions each day.
The “Shadow Fork” is connected to peers on a canonical Ethereum chain, which means that it will share some information with the main Ethereum network too. This particular situation could make some transactions visible on both chains.
Ethereum Foundation Developer Marius van der Wijden in his recent tweet has stated that the testnet has processed nearly 1,166,016 transactions in an average block time of 14.8 seconds.
Related Reading | The Shanghai Tragedy Reminds Us Why China Banned Bitcoin
This launch marks a very important step for the Ethereum Developers as the testnet takes the stress test a notch higher in terms of the PoS actualisation.
The Kiln merge testnet before this was specifically concerned with addressing issues involved with running the nodes, testing the infrastructure and deploying the contracts.
The Beacon Chain is the first stage of the Ethereum 2.0 upgrade which had gone live in December, last year. The next step which is called The Merge is expected to be completed by June or the beginning of the third quarter of 2022.
The shadow fork explorer site was supposedly facing a network outage at midday Asia time on Tuesday, however, at the time of writing the network seemed to be on track with processing the test transactions.
Ethereum On A Southbound Movement. Image Source: ETH/USD on TradingView 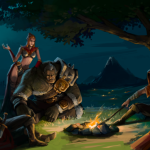 Avalanche is Taking Over GameFi: Bold Point is Going Public on TraderJoe