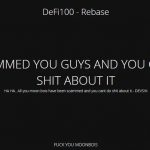 How to Prognose the Next Big Move of Bitcoin Price