Bitcoin Dives Further, Here’s Why BTC Could Find Bids Near $42K
Next Article 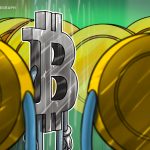