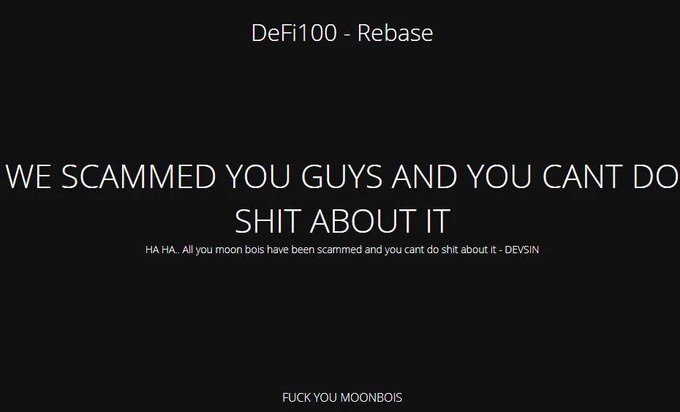 The cryptocurrency market was taken by storm when Decentralized Finance, a blockchain-based finance currency announced on the website that it scammed investors worth $32 Million. Later, a clarification was released by DeFi100 that it has not duped investors but the website was hacked. DeFi100 is a famous cryptocurrency project like Bitcoin. We covered its features in our earlier post. Reports and tweets started flowing in the crypto world saying that it allegedly scammed investors of $32 million, which were later found to be untrue.Hackers put out a message on the website stating:Hacker’s put out the message on the DeFi100 websiteAccording to a tweet of an analyst, it was $32 million and there was a doubt of fraud assuming hackers left the message. But DeFi100 official Twitter handle said in a tweet:“The website was hacked yesterday and the message was shown by the hackers. It has been taken down”. They added, “We reiterate that we have not made any exit. ” Further, they also stated that the highest market cap the project ever had was $2 million while the hackers claimed at the website they scammed $32 million. The investor sentiment was cautious after the hack. Many analysts stated as the bull market stops, expect a huge increase in exit scams over these next few months.What happened after the hack?DeFi100’s creators clarified that the hackers do all, and they have done nothing to scam the investors. According to the Coindesk report, the value of the crypto decreased 25% in the last 24 hours after the hack. After the DeFi100 creators scamming, it was reported that the United States principal law enforcement agency announced that they received 1 million complaints of investment frauds and online scams during the last 14 months.Digital hacks in crypto worldIC3, a digital agency in educating people by sharing reports and data about new scams and digital crimes. Last Monday, the Federal Trade Commission (FTC) reported that scammers stole over $2 million of Elon Musk in cryptocurrency since October. According to The FTC’s new data, scammers defrauded 7,000 people since October 2020 for bogus cryptocurrency investments of over $80 million. FTC says these investments are “Full of fake promises and fake guarantees.”It is needless to mention that the cryptocurrency market is still unregulated. Investors have to be cautious of defrauding and scam. At the time of writing this, the DeFi100 is trading at $0.550705 with a 24-hour trading volume of $2,977.83. It is up 15.64% in the last 24 hours. The website is working normally now at the time of writing this piece of news.***